The median price of an apartment in Manhattan is about a million dollars. That will get you a one bedroom.

The New York Times reports that in the third quarter of 2015, the median price for a Manhattan apartment was $999,000 (Manhattan Prices Near Million Dollar Mark).

The median price is a more accurate picture of the market than the average price, which is skewed by those stratospheric sales north of $50,000,000 you keep reading about.

A quick search for apartments currently for sale in Manhattan priced between $950,000 and $1,050,000 yielded nine studios (yes, there are million-dollar studios), 84 one-bedrooms, 36 two-bedrooms, and seven apartments with three or more bedrooms.

Yes, I know, not so long ago a million dollars could buy you the moon. And if you're in Columbus or Muncie, it probably still can. But New York is--well, let's just say it's different here.

According to Jonathan Miller of Miller Samuel Inc. Real Estate Appraisers and Consultants (millersamuel.com), there are not enough million dollar apartments to go around.

If you've got one to sell, it will go in a flash.
Here's Jonathan's absorption report for the month of November, which shows the number of months it will take to sell the currently available properties at each price point. 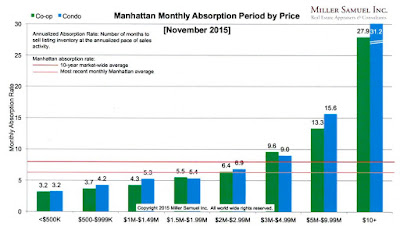 You may have seen this chart here before, but in case you haven’t, the green columns are co-ops, the blue ones are condos. The total number of months of inventory in each price bracket is at the top of each column. Less than six months is a sellers' market, six to nine months is a balanced market, more than nine months is a buyers' market.

As you can see, with no more than five and a half months of inventory priced under $2,000,000, the lower end of the market is still squarely in the hands of the sellers.

On the other hand, with up to 31 months of inventory, the upper end is still equally squarely in the hands of the buyers. If you've got $10,000,000 or more to spend on an apartment, sellers will greet you with open arms.

Another reliable authority on the subject is Noah Rosenblatt, who publishes Urban Digs (urbandigs.com).

Noah reports that 49% of sales in Manhattan trade at or above the asking price.

This is what happens when there's so little inventory at the most popular--that would be the lowest--level. It also indicates that properties that are priced properly are the ones that are selling.

Buyers are not making offers on properties that are priced too high. And they all read what's on the web about real estate, so they know when a seller is delusional about price.

Among other helpful services, Noah also tracks the number of contracts signed every month (Urbandigs Monthly Contract Activity), which is a more current indicator of market activity than the number of closed sales, as there is a lag time of two or three months between contract signing and closing.

He groups them by the month for the last eight years so you can compare this past November to Novembers in 2014, 2013, 2012, and the five previous Novembers, to eliminate seasonal changes in the market.

To find out what your apartment is worth in this environment, call me at 917-991-9549, or e-mail cstimpson@stribling.com, and I'll happily come to look at it and put together a broker's opinion of value. No charge or obligation. It's my idea of fun.

If you're thinking of buying an apartment, I'll be glad to help.
Posted by Confidence Stimpson at 12:09 PM