(The fifth and last building profile in a series on what it costs to live on and what you get for the money.)
The building:
5 East 22nd Street, a modernist brick condominium building constructed in 1982-1983, was designed by the architectural firms Philip Birnbaum & Associates and David Kenneth Specter. 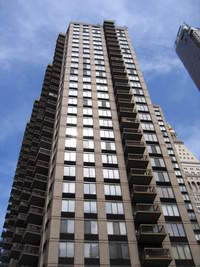 It offers 423 apartments spread over 31 stories above .  The building occupies a 28,000 square foot lot bordered by 22nd Street on the south side, Broadway on the west, and 23rd Street on the north.
There are currently three active sales listings, one listing under contract and three active rental listings.  A permanent certificate of occupancy was issued in 1984.
About 100 of the apartments have two bedrooms, and the penthouses have three or four, but most are one bedrooms or studios.
What it costs to live there:
Average price per square foot for the last twelve months was $1,287.  Highest price ever in the building was $3,150,000, or $1,601 PSF for a 22nd floor three bedroom, three bath apartment of 1967 square feet with a balcony.


Average monthlies are about $1.50 PSF including real estate tax, kept low by the large number of apartments in the building. A 421A tax abatement expired some years ago.


Average annual rental price is about $59 per square foot, or $4.94 per month.  For a 650 square foot one bedroom on a high floor you’d pay about $3250--$3350.
What you get:
A view.  The good news about Madison Green is that it has views in three directions.  To the north, you’re looking at and beyond.  To the west, there’s the .  And to the south you’ve got open views over the Gramercy area.
The bad news is that there are as many as 20 apartments on some floors.  This makes for long, echoing corridors reminiscent of a hotel.
Full service. And the amenities are plentiful.  There’s a bicycle storage room, a garage, a garden, a fitness room, a laundry room on every floor, a common lounge and a common storage room.


There’s also a Chase ATM.  Early on, this was out in the lobby, adding to the feeling of impersonality about the building, but it has since been moved into its own little closet.
The building’s entrance is on 22nd Street, so to get to the park, you have to walk around the block and cross busy, wide 23rd Street where it meets Broadway and Fifth.  But of course, it’s worth the inconvenience.
Posted by Confidence Stimpson at 5:16 PM