Is the Manhattan real estate market softening? Yes and no.


At the top, it's melting, rapidly.  At the bottom, it's granite.

More than three thousand new and ridiculously expensive apartments are about to hit the Manhattan market.

As if we didn't have enough.

The Corcoran Sunshine Marketing Group defines ridiculously expensive (they call it "luxury") as costing $2,400 per square foot or more.

The March 31 issue of Crain's New York Business says that well over half of a total of more than 5,000 new apartments will be priced at that point. ("Luxury Market Cooling")

Of course, this is not counting the high-end condos already on the market. Per The Real Deal, condo units at Extell's One57, at 157 West 57th Street, are still not sold out, more than four years after sales launched.

The chart below was prepared by Miller Samuel Real Estate Appraisers and Consultants. Read it and weep. 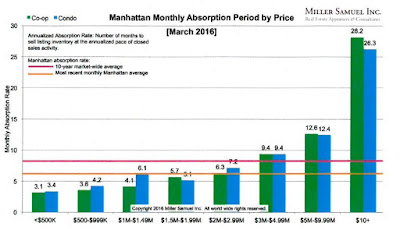 As you can see, at the lower end, the market is still firmly in the hands of the sellers.  Less expensive properties are being snapped up before the ink is dry on the listing agreements.

At the top, the market is at the other extreme, flooded with new, shiny and expensive condos.

It's definitely a buyers' market. But where are the buyers?

I don't know.  The Real Deal doesn't know either.

"So how much demand actually exists for uber-luxury condos?" The Real Deal asks.

"Who today knows how many people around the world can afford an ultra-luxury apartment, and how many of them would be willing to buy one in New York?.....This dilemma doesn't just concern luxury developers but the whole industry.

"If developers are overestimating global demand for high-end New York product, they could be inflating a luxury bubble that could drag down the entire market.  If they are underestimating it, the industry may well be misdirecting its resources."

I don't see any signs that they're underestimating it.

One developer, HFZ Capital Group's Ziel Feldman, is making his properties smaller and pricing them between $4,000,000 and $8,000,000. Feldman is calling this "affordable luxury." We'll see if it works.

Jeff Blau, CEO of The Related Companies, says that at this point, building on Billionaires' Row is more like gambling than investing. (The Real Deal)

In a panel discussion at the 92nd Street Y last Thursday, developers Jared Kushner, Steve Witkoff and Abby Hamlin, along with Blau, seemed to agree.

"Gary [Barnett, of Extell] built that building and then 40 other developers came out and said, 'Oh, I've got an original idea. Maybe I'll do a similar project in a similar area with similar pricing,'" Kushner commented.

Crain's New York Business says that despite a number of new projects coming online in the past year, the number of sales increased by a mere 8%, while the number of units on the market fell as developers of new buildings chose to keep homes off the market.

And they really, really have to.

Below $2,000,000 it's definitely a sellers' market. This is where more inventory is seriously needed.

But that's another story.

Call me at 917-991-9549 or email cstimpson@stribling.com.  I'll be happy to visit your apartment, loft, or townhouse and give you a detailed broker's opinion of what it could fetch today, supported with figures and comparable sales.  Of course, there's no cost or obligation involved.

Even if you plan to stay in your home forever, it's always good to know what it's worth.

Posted by Confidence Stimpson at 3:24 PM