Central Park West: How much extra does it cost to have a view of the park?


Central Park West stretches from the extravaganza of condos, shops and hotels surrounding Columbus Circle all the way up to the more sedate and peaceful Frederick Douglass Circle, presided over by the statue of Frederick Douglass.

There are clusters of huge, modern condominium buildings at both ends.  In between are the stately Grand Dames--the Beresford, the Dakota, the Majestic and other co-op buildings--most of them eighty or ninety years old, with their white-gloved doormen and limestone or antique brick facades.

In the last twelve months, about twenty condos have sold in the buildings on Columbus Circle and Trump International, at 1 Central Park West, with an average price per square foot of $4,400.

But even the rarefied atmosphere of Columbus Circle, where you can live in luxury on the 70th floor and admire views of Chicago while sipping your evening cocktail, does not approach that of 15 Central Park West, almost certainly the most sought-after (as we say in the trade) condo building in New York.

Average sale price per square foot for the last twelve months at 15 CPW was about $6,300 per square foot, or almost $2,000 more than that for the Columbus Circle condos.


Even the highest priced co-ops cannot approach these levels.  It's hard to compare co-op and condo prices because square footages are rarely given for co-ops.  But the highest price for a co-op on CPW in the last twelve months was $20,000,000, while a condo at 15 CPW went for $32,500,000.

However, the Beresford, at 81st Street, and the legendary Dakota, at 72nd, along with a few others, can regard most of their co-op opposite numbers across the park on Fifth Avenue as equals in sought-afterness.

Eight apartments have sold in the past year at the Beresford and the Dakota with between five and nine rooms and an average price of more than $6,000,000. 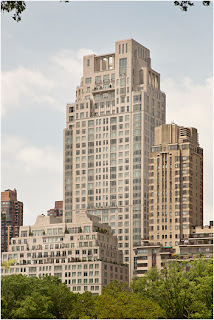 It's small for a two-bedroom, and it had only one bathroom, but it was described as being in excellent condition and there are trees outside the living room window.  They're not park trees, but they're trees. 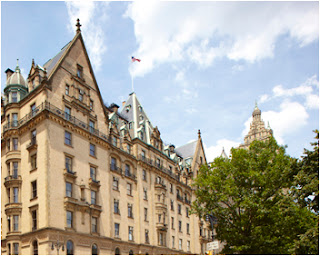 (At left, the legendary Dakota)

A park view makes an almost unbelievable difference in the price of a Central Park West apartment.  The extra advantage of the view can double the price.

(A view of the park that clears the trees will command even more, but we're not going to discuss that now.)

It's a wide range.  A perfectly respectable two bedroom with a living room large enough for a dining area in a prewar doorman building (nearly all buildings on CPW are prewar and have doormen) with direct park views from the living room and one of the bedrooms went for $1,650,000.

The one that went for $10,250,000 was on a very high floor, had a formal dining room and a pantry as well as the two bedrooms, kitchen and living room, and besides the views of Central Park, it also had views of the George Washington Bridge.

One bedroom and studio apartments unfortunately do not come with park views, those being reserved for the larger spaces at the fronts of the buildings.

In fact, those smaller apartments often look at interior courtyards. They're very quiet, though they get little light. But they're fantastic value for someone who wants to be near the park. Average price for a one bedroom was a little over $700,000, for a studio a little over $300,000.

As is the case with Fifth and Park Avenues as well as CPW, there are far fewer condos than co-ops.  These avenues were built up long before the condo era began.

There were just 116 condo sales on all of Central Park West in the last 12 months, and only 44 of those were below 96th Street.  Most of the remaining 72 sales were in the four park-facing buildings of the seven-building Park West complex, built in the late 50s-early 60s as an urban renewal project, from 97th to 100th streets.

Prices for apartments here are substantially lower than those for apartments farther south.  If you want a condo near the park and you're not obsessed with prewar, Park West offers excellent value.

Of the other 44 sales, sixteen were at Trump International, aka 1 Central park West.  Five were at 15 CPW and seventeen were in The Century, built in 1932, converted from a rental in 1989, and comprising 411 units.

Here's the link to an article in the Sunday Times about Central Park West:

Posted by Confidence Stimpson at 1:33 PM

The Toronto Condo offers a unique and customized approach that will guide you through the Toronto condo market helping you achieve a profitable condominium investment. We manage the day to day operations of your condo property leaving you free to enjoy your life- safe in the knowledge that your Toronto condo investment is being taken care of.