What are the "best" buildings in Soho?

Another in a series on what it costs to live in Soho and what you get for the money.


Well, it would be fair to include the ones that have had numerous sales with prices of more than $5,000,000.  If they can command that kind of money, clearly at least some people consider them the best.
There are other excellent buildings that have sales in the stratospheric price range but don’t have a lot of turnover.
Still others, usually co-ops, may have beautiful cast-iron facades, low maintenances, a great location and more reasonable prices.
Let’s start with the condos.

40 Mercer, designed by the starchitect Jean Nouvel and built in 2006, has had 19 sales of more than $5,000,000 in the most recent five year period.  Part of the reason for the high number is that it came to market in 2006 and closings began in 2007.  So the whole building has been on the market in the last five years.
Built from scratch on a parking lot, the building is exempt from the artist certification requirement, as the city has waived it for new construction on a site where no building stood before..
There are 41 units spread over 14 stories, ranging in size from one to four bedrooms and from 1222 to more than 4000 square feet.  Ceilings are as high as 12’.    Amenities include a 24-hour doorman, concierge, underground parking, pool, sauna, steam room, Jacuzzi and gymnasium, landscaped courtyard and rooftop terrace. What Curbed calls “the brokerbabble” says,  “The stunning 14-story building on downtown’s best block offers magnificent glass curtain walls with a rhythm of panes in vibrant hues of red and blue.”
It’s not downtown’s best block.  It’s not even Soho’s best block, although it’s gotten a lot better since 40 Mercer was built on it.  It’s in a part of Soho that until 40 Mercer arrived was considered the least desirable because it’s only a block from Canal Street.

And the “rhythm of panes in vibrant hues of red and blue” casts vibrant shadows of red or blue all over everything in the apartments.  If you’re not fond of red or blue, don’t live there.
Regardless of all of this, it’s an incredibly popular building.  Average selling price in the last year has been about $2,600 per square foot. 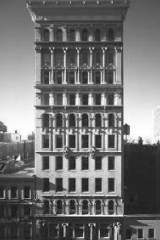 The Soho Mews, at 311 West Broadway, designed by Gwathmey Siegel and built in 2007,  comprises two buildings, one on West Broadway and one on Wooster, with what the marketers call a “secret garden” in between, designed by the landscape architect Peter Walker.
The Soho Mews’s 68 units on 9 floors include five duplex “townhouses.”  Developers call them townhouses; everybody else calls them maisonettes, that is, ground floor apartments with entrances both from the street and from the building’s lobby.  These also have some private garden space that’s been extracted from the secret garden.
Of the 58 recorded sales, six have been for more than $5,000,000.  Average price per square foot is around $1,800.  Amenities include 24-hour doorman and porter service, an attended parking garage, a fitness center managed by Drive 495, and an in-building art information advisory service by Art Production Fund.  Just in case you don’t know anything about art and you don't know what you like, either.
The secret garden at Soho Mews More to come.
Posted by Confidence Stimpson at 1:38 PM